Dr. John P. de Neufville, Ph.D., co-founded Eutectix, LLC and serves as our President and Chief Executive Officer. He co-founded Voltaix, LLC in 1986 (acquired by Air Liquide in 2013) and served as its Chief Scientist. Prior to Voltaix, Dr. de Neufville was Chief Executive Officer of the Ovonic Battery Company in Troy, Michigan. He is the author or co-author of more than 35 papers and has been granted eight U.S. patents. Dr. de Neufville holds a Ph.D. in Applied Physics and Materials Science from Harvard University and an M.S. in Geology from Harvard University and a B.S. in Geology from Yale University.

Tom Smith is our Chief Financial Officer and a co-founder of Eutectix, LLC.  He has worked in the manufacturing and industrial sectors for all of his career.  He consults with small manufacturing companies to improve their operations.  He was CEO of a small manufacturing company that made industrial staples.  He was CFO of Voltaix.  He was COO and Director of a NASDAQ company that manufactures air handling and air pollution control equipment.  Prior to that he was a Project Manager and a Process Engineer.  He holds 2 patents.  Tom has a BS in Chemical Engineering from NJ Institute of Technology.

Dr. Henry Lee is a co-founder of Eutectix, LLC and also co-founded Voltaix and was Senior Scientist/Safety Officer at ECD, Inc. Henry holds an MBA from NYU, a Ph.D. from Columbia University, and a M.S. from University of Stuttgart. 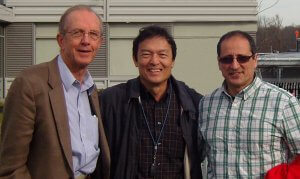 Dave Smith is our Director of Development and co-founder of Eutectix, LLC. Dave evaluates ongoing melting activities as well as develops new alloy projects for both our Tolleson, AZ and Troy, MI facilities. Over the past forty years, Dave has been producing and developing alloys in the aerospace, magnet, battery, and hydrogen storage markets. He worked with Howmet Turbine Components and the Ovonic Battery Company before joining Eutectix in 2014. Dave holds a BS from Michigan State University.

Dave has been engaged in the Chemistry and Metallurgy of a wide range of metals and alloys throughout his long career, starting with an RTZ/Johnson Matthey joint venture into rare earths in 1969 where he developed and expanded production of rare earth salts, metals and alloys.

Trained as a metallurgical chemist at Nottingham University (UK), he transitioned to a commercial technical role after gaining considerable production experience in chemical and metallurgical processing along with alloy and applications development.

He progressed to GM (Europe) with Honeywell Electronic Materials and joined Less Common Metals as Commercial/Technical Director in 2001, a post he held until 2014 when, after a short retirement, he joined Eutectix as Senior Advisor.

In addition to his Eutectix role, Dave also acts as an industrial consultant/advisor to several other companies at senior management and board levels.

Mike Hernandez is our Director of Operations. Mike joined Eutectix in the spring of 2019 as the Deputy Director of Manufacturing at the Troy, MI facility. He previously held roles in R&D and as a Project Manager with Materion in Elmore, OH. Mike studied Mechanical Engineering at the University of Toledo and is a certified Lean Six Sigma Black Belt.

In addition to those mentioned above, additional Eutectix team members are listed here. Why not get to know us better?